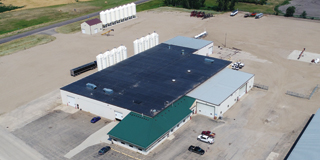 Originally from Bowdon, she went to NDSU to earn a Bachelor of Science degree in Animal and Range Science.  Most of her work experience revolves around higher education and ag education.  The majority of the last 12 years was spent as program coordinator at the Dakota Precision Ag Center at Lake Region State College working on workforce training, writing and reporting grants, and doing some computer trainings.  She recently also was a Career Development Manager for the ND Implement Dealers Association.

Her free time mostly revolves around all of her horses, cats and dogs and helping out with pet rescues. She also does some various volunteer work in New Rockford which currently includes serving as president of the New Rockford Area Betterment Corporation (economic development board).

Kim was born and raised in Maddock and graduated from high school in 1998.  In December 2001 she graduated from Northwestern Bible College in Roseville, MN and returned home to farm with her dad, Paul.

In 2002, Kim, her father and 3 area farmers began Precision Ag Results.  In early 2002, she and her dad took five days of training in precision ag mapping from SST Software in Stillwater, OK.  Through the training, along with the help of Gary Wagner of Crookston, Kim began making maps for variable rate nitrogen application.  Through the years, Kim’s role changed from not only mapping, but also soil testing and then to organizing and running the soil testing/mapping side of the business.

Throughout all these years, Kim had been traveling to Poland on many short-term mission trips.  In December 2012, Kim decided to move to Poland to be able to focus more on learning the Polish language and sharing the gospel of Jesus with them.  Kim currently lives in Poland, but thanks to technology, she continues to work for PAR making maps.

Paul was born and raised in Maddock and was the last graduating class of the Benson County Agricultural and Training School in Maddock.  He also graduated in 1973 with a degree in Ag Education.  He taught Vo-Ag and Adult Farm Management in Maddock and continued to teach even after he began farming in 1975.    He farmed for 40 years and in 2002 teamed with 4 other area farmers to start Precision Ag Results.